Home Adventure Ljubljana – Because the sky is not the limit… 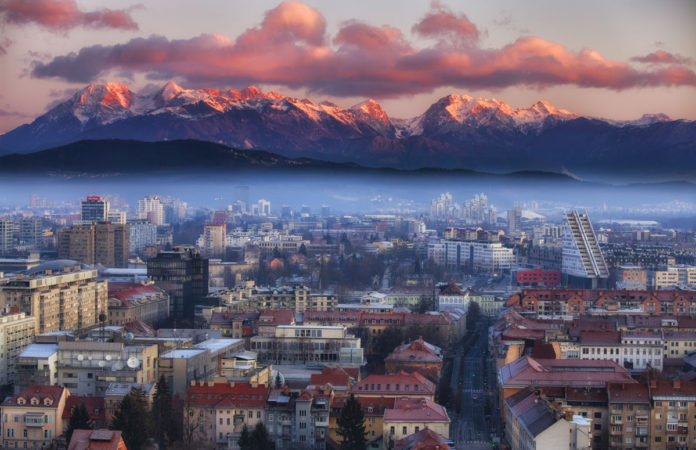 “When one finds the land, why seek the sky?” wrote the renowned Slovenian poet Edvard Kocbek in a haunting paean dedicated to the war-weary partisans who marched their way home in time to the Nazi’s retreat. Whether it was the Axis Powers, the Hapsburg Monarchy, Napoleon’s army, the Ottoman Empire or the Romans before them, there have always been those who were desperate on occupying Slovenia. As any savvy tourist can concur, there are ample incentives. After all, if dynamic cities, romantic villages and awe-inspiring landscapes are anything to go by, the country easily possesses that which we only dream of when staring at the sky. With Baroque, Romanesque, Gothic, Neoclassical and art nouveau motifs all converging on one set, Ljubljana’s old town appears like the elaborate reverie of an ambitious Hollywood director. It is a cinematic adventure of epic proportion while those who visit are made to feel like characters in a Period Romance. From the site of the ancient Roman city of Emona, the architecture is a constant reminder of this region’s august past – a theme that recurs both in the many cultural events as well as in the complex array of fine foods available. While restaurants like Restavracija Strelec play off historic fare such as game and oxtail, others like Julija reflect the vibrancy of local contemporary cuisine. Slovenia’s varied terrain makes for a highly diverse cuisine and viticulture. From Mediterranean specialties to earthy regional dishes, the country is lined with traditional gostilnas and bistros alike. Overlooking Ljubljana stands a 900-year old Castle. The oft rebuilt structure affords a view of the regal capital set against the backdrop of the Kamnik Alps. The Prešernov trg square, the opera building, the National Gallery and Museum, the Orthodox Church and even the more rurally located Plečnik House (whose recherché collection is devoted to the country’s greatest architect): each elicit the ongoing story of Central European grandeur. Whether one hikes, rents a city bike, takes a river cruise, hops aboard a stand-up paddle boat or jumps on that contemporary vehicle, the Segway, there is lots to do in this conscientiously ‘green’ capital with its endless number of cultural events, its bustling nightlife and its rich expanse of verdant landscape. The city’s Tivoli Park includes Tičistan (Birds’ Home), a forest trail, and the much lauded Jakopič Promenade. A rose cultivar aptly named the ‘Ljubljana Rose’ also grows there. If you cross the forested Rožnik hill above the Tivoli park, you can reach Mostec, located adjacent to the city Zoo. This area comes complete with hiking routes and a seasonal ski jump. From Mostec, it doesn’t take long to get to the Koseze Pond – a small marshy lake that is home to several rare and endangered plant and animal species. With fishing and boat races in the summer and skating in the winter, this pond – as well as the Path of Remembrance that surrounds the city – is a year round attraction. Another city park Špica boasts a large area of Ljubljanica’s riverbanks paved with wood. One of Europe’s oldest Botanic Gardens is in close proximity. Since the country varies a great deal from region to region and is relatively manageable in terms of size. Ljubljana is not only a brilliant destination in its own right but a great place from which to set out on exciting year round adventures. From Alpine regions to the Adriatic’s shore to cascading hills and fields, Slovenia is a variegated world of mountains and water.  The Ljubljana Marshes Nature Park is one of the only remaining natural peat bogs and wet lands in all of Europe. It used to be home to prehistoric pile dwellings and is an acknowledged UNESCO World Heritage site. From the foot of the Kamnik-Savinja Alps with its famous hunting lodge designed by Jože Plečnik to the Predaselj gorge, and the thermal bathes of Terme Snovik, even clear to the other side of the country where Sava’s forested hills extend across hundreds of acresthe countryside is a brilliant juxtaposition where untainted nature meets high-end hedonism at a very moderate price.

The Vintgar gorge, the nearby ponds in Draga and Podpeč lake make for a picturesque family outing. For the more robust there is Geoss Adventure Park with its amazing tree-top climbing routes. Boasting an 800-metre-long rope slide, this park is as close as Tarzan ever came to civilization. If climbing rocks are more to your inclination, there’s always Bohinjska Bela – an open air cathedral of natural rocks scattered around the powerful torso of the jutting Slovenian Alps. As for mountain biking enthusiasts, there’s Krvavec Summer Park with recreations that run the range from downhill karting to scootering to tower-climbing to archery to jumping on a trampoline to testing your mobility skills. And should the urge to go white water rafting strike, well, there’s always the Sava River while the Karawanken Mountains make a perfect place to try some tandem paragliding. Then again, if extreme sports are not your proclivity, Slovenia does have some of the finest fishing and golfing world-over. While Lake Podpeč and Lake Rakitna are idyllic sanctuaries for the former, the glacier that over centuries turned into Lake Bled sports golfing greens ‘on par’ with any given course. With the Alps seen from just about anywhere in the country, it is little wonder that when winter descends on Slovenia, the region transforms itself into a skier’s paradise. Whether one chooses Kranjska Gora or Mariborsko Pohorje or Cerkno, it’s difficult to go wrong in a country steeped in mountains. Overlooking the colorful landscape of Slovenia from a Julian summit, it becomes easy to understand why so many would-be-conquerors had vied to take this country. It is also makes it duly comprehensible as to why the poet laureate Kocbek concluded that he had little reason left to dream of the skies once one had beheld the fertile soils of his miraculous homeland.

Ljubljana – Because the sky is not the limit…

Five Star Deluxe….And Then Some!

How well do you know Ljubljana?

This website uses cookies to improve your experience while you navigate through the website. Out of these, the cookies that are categorized as necessary are stored on your browser as they are essential for the working of basic functionalities of the website. We also use third-party cookies that help us analyze and understand how you use this website. These cookies will be stored in your browser only with your consent. You also have the option to opt-out of these cookies. But opting out of some of these cookies may affect your browsing experience.
Necessary Always Enabled
Necessary cookies are absolutely essential for the website to function properly. This category only includes cookies that ensures basic functionalities and security features of the website. These cookies do not store any personal information.
Non-necessary
Any cookies that may not be particularly necessary for the website to function and is used specifically to collect user personal data via analytics, ads, other embedded contents are termed as non-necessary cookies. It is mandatory to procure user consent prior to running these cookies on your website.
SAVE & ACCEPT